Plann is this incredible app that you can get your hands on for only $3. Yeah, with three bucks you can start using this app that allows you to drag and drop your Instagram feed, manage hashtag groups, and allows you to stay on top of being consistent on Instagram.

If you need proof, watch this video so I can walk you through the app so that you can see for yourself!

I interviewed Christy, who created this app, on the Market Beautifully Podcast. Afterward, I knew I needed to create an in-depth blog post on Plann and how I’m using it for my business. Christy amazed me because she deeply cares about the users of this app and you will catch on to this obvious fact in the episode which you can listen to by scrolling down and clicking on the “listen to this podcast” image!

Within the app there is a shake feature to where if you shake your phone you are able to let Christy know what needs to be improved in the app or if something is not working so her team of developers can get it fixed.

There are some features that really stand out to me when it comes to using Plann. Obviously, it is fantastic for any business owner that wants to improve their consistency on Instagram and wants complete control over the aesthetic of their feed (thanks to the drag and drop feature!) but you can also store all your 30 or so hashtags within one group. Yeah.

Also, I had branded photography done by Amanda Floyd Photography + she’s pretty cool and incredible at what she does. How perfect are these photos of this app?! So there are three major features that I absolutely have to tell you about. Because these features make me want to get on Instagram more just because this makes adding to my account a million times cooler.

Uhh, yeah. You can drag and drop all those little squares exactly where you want them that way your feed will look brilliantly put together once every image is all scheduled out. It’s extremely simple and this alone makes the app worth it. I have loved being able to have more control over the design of my feed and that is what Plann gave me, more control!

Managing all those hashtags can be the worst. I used to recommend using the notes app on your iPhone and typing up all the hashtags and then selecting all of the text, copying, and pasting into Instagram. But with Plann, I have my “hashtag group” that I call MB BIZ that has my main hashtags I want to put in the comments. All I have to do is hit the “copy” button and I get the “copied it!” message & then I open up the Instagram app and easily paste it into the first comments. Takes a few seconds and is easier than selecting all the text on a note on my iPhone, for sure!

For me, I only have one hashtag group but for others I know their Instagram posts have different topics. For example, if you were a photographer who posted on weddings + engagements you would have a wedding hashtag group and engagements hashtag group that way those hashtags are specific to that topic. Neat, right? Just being able to schedule out my Instagram posts and seeing how they will look on my feed is a majorly awesome feature that I love. It is beyond easy to add a caption + schedule the date and time. Whenever it is time to post, I get a notification and spend a few seconds getting it up on my Instagram page! I love the reminder and just how simple everything is.

This app is so minimalistic. What I love most is that you could hand this app to anyone and they would pick it up so easily. Christy had this app designed so that there were not a lot of buttons and it wasn’t feature crazy. Once you get this app, you can of course suggest features to her as well! She has added quite a few features just from suggestions from the community so feel free to give this app a try and reach out to her.

If you were curious and wanted to listen in on the interview I had with Christy, you can either watch this video on YouTube OR go listen to the audio version over on maraburkes.com/podcast. This was episode eight and we had a lot of fun getting to talk marketing and all things Instagram.

If you want to listen to the audio version of this podcast then click the button below which will lead you to episode 8! We had a great chat and I know you + your amazing business will benefit a lot from it.

This wasn’t a sponsored post, I just absolutely love the app Plann and everything this company stands for. All photography within this post was taken by Amanda Floyd Photography. 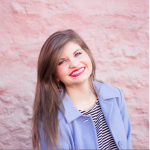 I’m Haley, the founder of Market Beautifully and the host of the Market Beautifully podcast. I’m obsessed with tortellini and educating others on how to market as beautifully as possible in the business world. What you do is incredible and I want to help make your voice louder so that your message can reach more people. I’m a fan of ladies who are entrepreneurs at their core and believe that we will make a difference together.